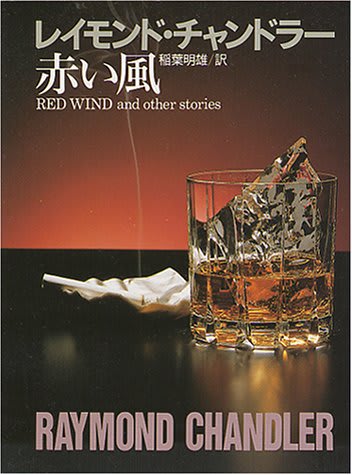 There was a desert wind blowing that night. It was one of those hot dry Santa Anas that come down through the mountain passes and curl your hair and make your nerves jump and your skin itch.

On nights like that every booze party ends in a fight. Meek little wives feel the edge of the carving knife and study their husbands' necks.

Anything can happen. You can even get a full glass of beer at a cocktail lounge. I was getting one in a flossy new place across the street from the apartment house where I lived. It had been open about a week and it wasn't doing any business. The kid behind the bar was in his early twenties and looked as if he had never had a drink in his life.

There was only one other customer, a souse on a bar stool with his back to the door. He had a pile of dimes stacked neatly in front of him, about two dollars' worth.

He was drinking straight rye in small glasses and he was all by himself in a world of his own. I sat farther along the bar and got my glass of beer and said: "You sure cut the clouds off them, buddy. I will say that for you. Been in before, haven't you, mister? Mine's Lew Petrolle. I ought to call a taxi and send him home. He's doing his next week's drinking too soon. He snapped his fingers so as not to disturb his piles of dimes by banging on the bar.

The kid poured him another straight rye and I think he doctored it with water down behind the bar because when he came up with it he looked as guilty as if he'd kicked his grandmother. The drunk paid no attention. He lifted coins off his pile with the exact care of a crack surgeon operating on a brain tumor.

Pdf header 1024 bytes in a kilobyte

The kid came back and put more beer in my glass. Outside the wind howled. Just then we had another customer. A car squeaked to a stop outside and the swinging door came open. A fellow came in who looked a little in a hurry.

He held the door and ranged the place quickly with flat, shiny, dark eyes.

He was well set up, dark, good-looking in a narrow-faced, tight-lipped way. His clothes were dark and a white handkerchief peeped coyly from his pocket and he looked cool as well as under a tension of some sort. I guessed it was the hot wind.

I felt a bit the same myself only not cool. He looked at the drunk's back. The drunk was playing checkers with his empty glasses.

The new customer looked at me, then he looked along the line of half-booths at the other side of the place.

They were all empty. He came on in-down past where the drunk sat swaying and muttering to himself-and spoke to the bar kid. Wearing a widebrimmed straw hat with a velvet band. The kid gave it to him and the fellow paid and put the drink down in a gulp and started to go out. He took three or four steps and stopped, facing the drunk. The drunk was grinning. He swept a gun from somewhere so fast that it was just a blur coming out. He held it steady and he didn't look any drunker than I was.

The tall dark guy stood quite still and then his head jerked back a little and then he was still again. A car tore by outside. The drunk's gun was a. It made a couple of hard snaps and a little smoke curled-very little. The dark guy took a week to fall down. He stumbled, caught himself, waved one arm, stumbled again.

His hat fell off, and then he hit the floor with his face. After he hit it he might have been poured concrete for all the fuss he made.

The drunk slid down off the stool and scooped his dimes into a pocket and slid towards the door. He turned sideways, holding the gun across his body. I didn't have a gun. I hadn't thought I needed one to buy a glass of beer. The kid behind the bar didn't move or make the slightest sound.

The drunk felt the door lightly with his shoulder, keeping his eyes on us, then pushed through it backwards. When it was wide a hard gust of air slammed in and lifted the hair of the man on the floor. The drunk said: "Poor Waldo. I bet I made his nose bleed. The door swung shut. I started to rush it-from long practice in doing the wrong thing. In this case it didn't matter. The car outside let out a roar and when I got onto the sidewalk it was flicking a red smear of taillight around the nearby corner.

I got its license number the way I got my first million. There were people and cars up and down the block as usual. Nobody acted as if a gun had gone off.

The wind was making enough noise to make the hard quick rap of. I went back into the cocktail bar. The kid hadn't moved, even yet. He just stood with his hands flat on the bar, leaning over a little and looking down at the dark guy's back. The dark guy hadn't moved either. I bent down and felt his neck artery.

He wouldn't move-ever. The kid's face had as much expression as a cut of round steak and was about the same color.

His eyes were more angry than shocked. I got enough expenses without that. Boy, can I kick eight hundred bucks in the face! He pulled his white coat off and his apron and came around the inner end of the bar. He went out, swung the door to and jiggled the lock from the outside until the bolt clicked into place.

I bent down and rolled Waldo over. At first I couldn't even see where the shots went in. Then I could. A couple of tiny holes in his coat, over his heart. There was a little blood on his shirt.

The prowl-car boys came in about eight minutes. The kid, Lew Petrolle, was back behind the bar by then. He had his white coat on again and he was counting his money in the register and putting it in his pocket and making notes in a little book.

I sat at the edge of one of the half-booths and smoked cigarettes and watched Waldo's face get deader and deader. I wondered who the girl in the print coat was, why Waldo had left the engine of his car running outside, why he was in a hurry, whether the drunk had been waiting for him or just happened to be there.

The prowl-car boys came in perspiring. They were the usual large size and one of them had a flower stuck under his cap and his cap on a bit crooked.

When he saw the dead man he got rid of the flower and leaned down to feel Waldo's pulse. Nice clean work. You two see him get it? I said yes.