All rights reserved. Use of this site indicates your consent to the Terms of Use. Page 1 of 2. Show 40 post s from this thread on one page. How good are the carbs on these engines?

There are quite a few videos on youtube, but most of the engines seem to run very rich in the midrange. Can they be tuned to run smoothly, or are the carbs a step down from a glow engine?

Or having to wait for my turn to land, et cetera. Although I do have a Evo 10cc gasser engine, I haven't done anything with it yet.

The small gasser engines use spark ignition which can let them run a little rich through the mid-range without problems.

So they tend to work fairly well at lower throttle speeds. Once you have the idle setup and the high speed adjusted the mid-range throttle works OK. The fuel regulator on both engines does pretty good at keeping the fuel flow constant, so the engines run well with the regulator on them.

The Evo gasser 10cc engine doesn't need any tinkering, Anyway I really don't remember any issues with partial throttle settings with the little NGH engines. So it must have been working OK.

I would suggest using the Evo 10cc gasser engine over NGH engine as it doesn't need to have any tinkering done to it. Plus the Evo engien has a needle bearing big end on the rod. The carbs on both engines worked well, no issues really.

My experience with one of each engine: The Evo 10 carb is excellent with good adjustment resolution, both low speed and high speed and a good mid range.

The NGH 9gt carb works poorly, difficult to adjust, and a very rich mid range that cannot be adjusted out. This carb seems to be a copy of a glow carb. I swapped it for a Super Tigre. The carbs on the engines work OK. Yes if one really wants to, they can mount a small venturi bore Walbro carb on the engines. You need to either make or find someone to make an adapter for it.

Just like I did on a NGH 9cc gas engine already.

But it isn't aesthetically pleasing to many people. It does work though. I think the issue with the NGH 9cc engine was people trying to get the carb to work like a normal carb. But people were trying to get it to work with idle at almost closed. I tried it like that too, and it just doesn't work. My engines worked Ok at speeds in between idle and WOT, but I never really flew my planes at those speeds much. The NGH engines also tend to spit fuel a lot so people tended to confuse that with it running too rich, when it fact it wasn't rich at all. 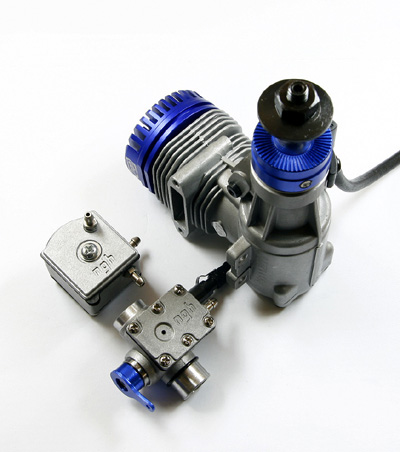 I had idled one of mine for several minutes with it spitting fuel and it kept on running just fine and when I increased throttle it picked on up no problem too. But the carb isn't all that great, I think NGH could have done a better job on it though. You may or may not have problems with it. Use a fuel filter to help avoid some little tiny debris getting into the regulator inlet valve and causing it to stick open and flooding the engine out.

One more question: Does the Evo 10GX carb need adjustment every day like a glow engine? Or is it more or less set-and-forget like a Walbro?

Actually for the NGh engines, after I set the needle, I just don't need to touch the thing afterwards any, But when winter arrived I needed to tweak the needle slightly. I assume when it gets warm I'll need to do it again. Does it lean out during the flight like a glow engine, so that it has to be set a little rich when the fuel tank is full? NO the NGH engine doesn't lean out in flight, if everything is working. I think it is like a click or two on the needle, nothing much.

I haven't run my Evolution 10cc engine or flew it in a airplane yet. So I can't say for sure about it.

The same thing happens with my other Walbro carb equipped gas engines too. The Evolution 10cc engine has a regulator built into the carb.

For some unknown reason NGH opted to put the regulator into a separate unit along with a fuel pump. Thus to emulate what Evolution has done, you'll need a regulator for the carb, maybe a Cline regulator would do the trick. I haven't tried it yet. The other plane doesn't have that slight leaning out issue.

It is vibration sensitive in that the vibrations seem to cause excessive gas bubbles inside the unit, and the gas bubbles travel to the carb resulting in erratic running of course. I think it is the gasoline vaporizing and not aiur bering sucked in.

Changing the needle profile can help with that though. Earlwb - I am a bit confused I guess- when I look at the ngh carb it has a square section on the front of the carb just like the 10gx carb. That is where the regulator is on the 10gx. So it looks to me like the ngh carb has the regulator right on the carb and the pump is in the separate cube. I don't think the Evo 10cc engine has been out long enough to have parts availability yet. But maybe when they gets some parts in, someone will try it. I should have tried it but my bench doesnt allow me to mount the glow type muffler on engine.

It seemed to work, but he was having problems though. But I don't know if it was related or not.

I wasn't really paying attention at the time. Now then a year or so ago, I did try that with the first engine and it didn't work. It might work with a regulator in between there though. I was thinking about revisiting it by using a Cline regulator along with the muffler pressure. Originally Posted by rc Post Or has someone already tried that? I just got my Evo 10cc engine in a World Models 46 size P I hadn't run the engine but for only a minute on the stand.

I adjusted the engine on the ground but when it got into the air the plane had very little power. It kept making a cutting out sound then it stopped after a few minutes of flying time and I did a dead stick landing.

Should I run the engine on the ground for more time to break it in. Basil, Sounds like your spark plug cap may be loose on the plug or the ignition battery is too low. The spark plug cap requires a pretty good push and a firm twist be careful not to break the plug to properly lock on the plug. Originally Posted by earlwb Post Basil Yousif.